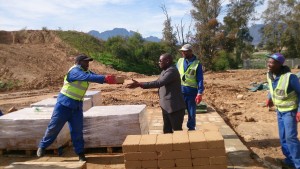 After being invited to present their Compressed Earth Blocks to Minister for Human Settlements, Bonginkosi Madikizela, USE-IT played host to the Minister at its production facility at Devon Valley Landfill in Stellenbosch.

“USE-IT and the Stellenbosch Municipality were honoured to have hosted the Minister for Human Settlements at the production facility at Devon Valley Landfill. Following our first meeting with the Minister and the follow-up visit to the site, we are encouraged by the proactive participation and support of the Minister, his Department, Economic Development and the Western Cape Provincial Government to make meaningful changes to addressing sustainable construction opportunities for the Western Cape,” says USE-IT’s Chris Whyte.

USE-IT is intending to grow and expand the application of Compressed Earth Block (CEB) Technology into mainstream construction in the Western Cape through both packaged Enterprise Development projects and private investment with the assistance of the Better Living Challenge.

“The opportunity offered by the CEB is twofold – at R460 per ton landfill costs, each 11kg block saves landfill costs of R4.81 (excluding the 5% cement stabilisation); and this is even greater that the production costs of each block.  As such we are not just saving landfill costs, but creating new products with economic value,” adds Chris.

“Such was the support of the Minister that we even had him in the production line catching and stacking blocks – although perhaps not appropriately dressed for the job at the time, he did such a great job he is welcome to come help anytime!”