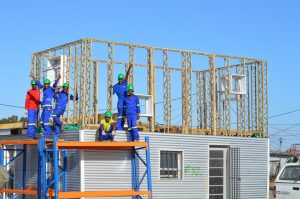 We recently had a chance to sit down and catch up with Barry Lewis and Siya James from Ubuhle Bakha Ubuhle (UBU) who reflected on their experiences of being involved with the Better Living Challenge 1, in which they were finalists.

UBU works with local communities to create housing solutions using processes and self-build technologies that are tested by the UBU team and the communities they work with using sustainable and appropriate materials.

Tell us about the early stages of the process?

The competition came at a key time in our involvement in the community of Sweet Home Farm, an informal settlement in Philippi, where we had been engaging in facilitation processes with the Street Committee leadership since the beginning of 2013 with a view to discussing housing options in lieu of City involvement in the community. After more than a year we were told by City officials – who were observing our work in Sweet Home Farm – to implement an incremental top structure approach to informal settlement upgrades that would seamlessly come out of the facilitation process undertaken. The BLC provided this platform to test a prototype.

We knew we wanted to build with sandbags but the idea needed to be incremental, so we turned the traditional methodology on its head. Instead of building in the traditional way of first constructing an Eco-frame, then filling it with sandbags and then plastering it, we chose to construct an Eco-frame, but then clad it immediately with zinc. On day one it will be a shack and will function as a shack, but the skeleton frame will be the signifier for the resident to fill the walls with sand bags while they live in it.  This method of building could seamlessly connect to a City of Cape Town-funded UISP project (Upgrade of Informal Settlements Programme), where the City provides a serviced site (concrete foundation and 1 to 1 toilets). We sought to rationalise the informal method of incremental change, namely ‘bit by bit’ change. When a dweller wants to upgrade they don’t get into debt, they save and add as they save. By creating a shack with a skeleton frame we are seeking to rationalise the shack as an entity that can be changed, bit by bit, into a house. Sandbags are then added to the walls, a concrete ring beam and columns are added to the top and corners, and the walls are then plastered. Each wall can then be finished independently of another.

What happened right after the Better Living Challenge 1 ended?

When we disassembled our prototype structure in 2014 outside the Cape Town train station we knew the next step would be to build it again in the community. However, this took a while. Firstly, because we needed some form of agreement from the City that this would be possible, and secondly, because we needed a proper foundation to do it justice. Once the foundation was complete, it was time to test the model, building in situ using community members.

Who was involved in the process?

Our intention was simple: build it slowly. We hear a lot of talk about going to scale and doing things quickly, but we knew our job was to allow the community to keep up with the changing face of the structure, so that they would have the chance to accept, reject or enhance what we were doing. We wanted to build with the community, not for them. We worked with a group of young men with whom we had been working closely at a nearby soccer club since 2010 (see picture below). While the construction was happening, the community also activated their savings scheme ladies to come and fill bags to start filling in the wall between the two units. Ms James, an employee of UBU, who lives in Sweet Homes Farm, had initiated the savings scheme in 2013 and therefore had a chance to activate her own ladies to get involved practically. 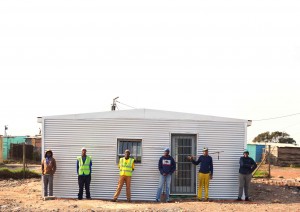 Tell us about your incremental approach?

Our methodology for change was always to incrementally upgrade only one of the houses, so that one could always see it juxtaposed against the original starting point. The frame and zinc for the single storey semi-detached shack went up within three days. But the magical moment came when one house had been completely filled with sandbags (with a concrete ring beam added to the head of the wall with concrete columns in the corner), and we were then able to remove the roof and carry on building the frame upstairs. A pure incremental approach. The ceiling joists for the single storey structure became the floor joists for the double storey and in the process the 21sqm house became 42sqm.

Tell us more about the current prototype in the community?

We find ourselves today at the point where we have a double storey structure sitting adjacent to a single storey structure. Internally it is fully plastered and painted, with a kitchen area, shower room (under the stairs), and open upstairs (although it is assumed this would be two bedrooms in a normal setting). On a hot summer day the temperature difference between the two houses is incredible, and acoustically it performs extremely well. And it’s bullet proof. In the future we will remove the zinc from the outside of the double storey and plaster it, hence completing the ‘shack to house process’.

How has the community responded to the prototype?

They are happy about this house. At least they know we are going forward because they can see something. In the meantime, we are training people with the construction and the money savings groups. It’s working well.

What does the future hold for you?  Where to next?

We will always be grateful to the Better Living Challenge platform for enabling us to test something that we believe will be the future to informal settlement upgrades. Informal communities are the only communities in the city that have built their own houses, so when we see such communities we are not looking at a housing problem but the current housing solution.

Our job is to activate the builders that already exist in these communities and use the systems already in place, such as savings schemes, so that we can assist the municipality to become more efficient in providing housing opportunities. Everyone talks about empowerment, but you can’t empower someone if you are not willing to ‘give’ power, and we believe this is vital if we are going to see meaningful infrastructural transformation in the informal realm over the next 25 years.